Welcome to our guide to the future of Chessington World of Adventures Resort. At present, this area is relatively light and is primarily where we shall be sharing updates on construction progress. We plan to develop our future guide into a true insight into the plans for the resort. We’ll detail what planning restrictions the resort has to work with and more detail surrounding the long-term development plans.

Please feel free to explore our construction galleries below. We will be updating regularly and updates to these pages will be shared on our social media profiles. Simply search for Chessington Buzz for the latest updates.

With the future at Chessington looking bright. We thought it might be a fun idea to look into the potential of the park as it currently stands. Delving in to possible locations for development.

Utilising the Long-Term Development Plan (LTDP) the park submitted in 2016. We removed aspects of the plan which have already happened or are in progress. Looking at the rest of Chessington, we see a few potential sites for new rides, animal enclosures or even bigger resort-based additions. 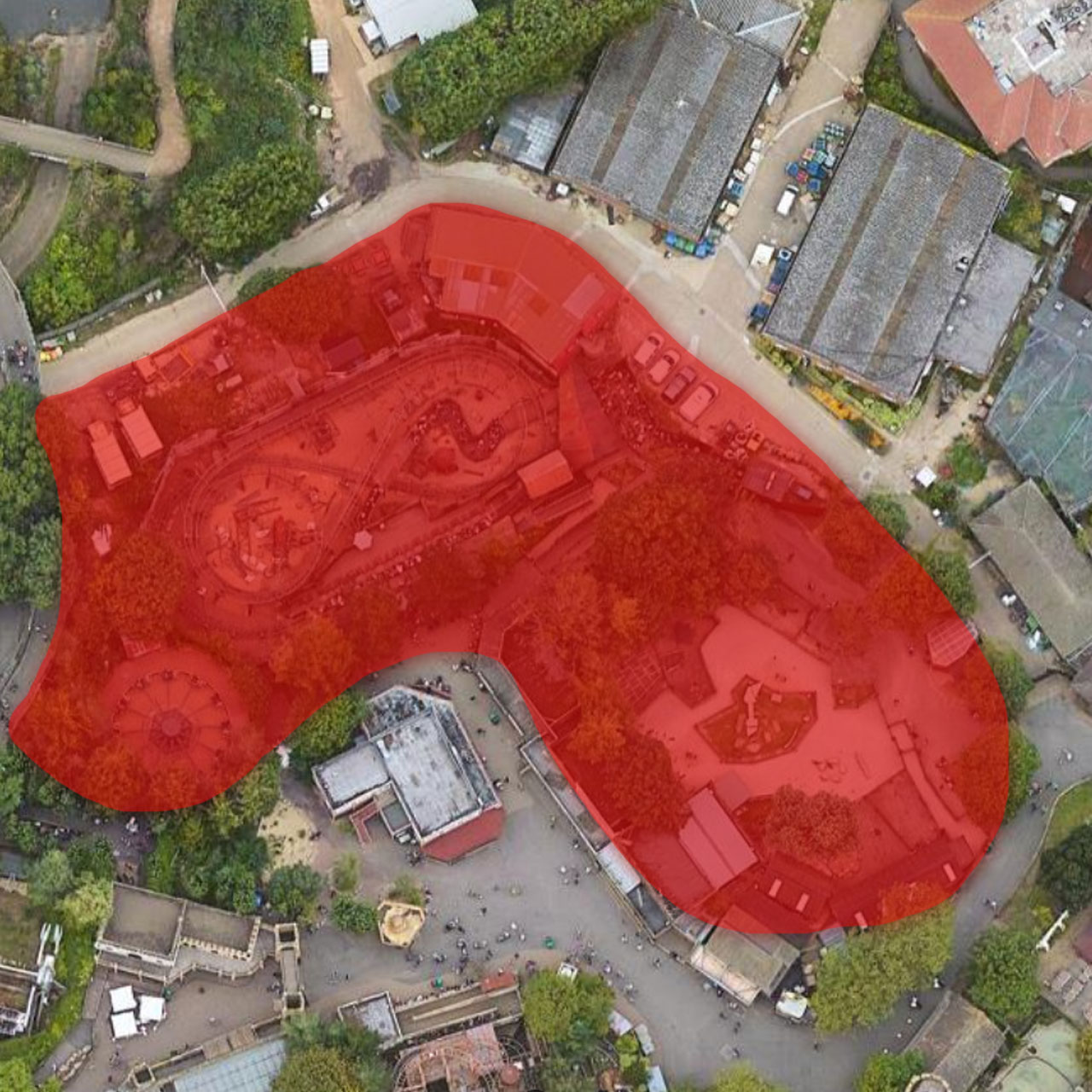 With Scorpion Express having a large amount of downtime in recent years and the ride aging. This seems like a prime location for redevelopment. With the nearby Children’s Zoo being listed as a redevelopment site by the LTDP. If we merge this site with Scorpion Express and the former Flying Jumbo’s plot behind Croc Drop. A large site appears. Perfect for a large-scale development, perhaps a new roller coaster could sit here?

All rides ultimately have a certain life span. We’ve already discussed Scorpion Express, but the other coaster in Mexicana could be on a similar trajectory. Aging and no longer suited to the parks target audience a new plot emerges. Taking in the former Safari Skyway station and maintenance building to make the area a bit bigger. This plot could be prime for work when the park decides Rattlesnake has reached the end of its life. 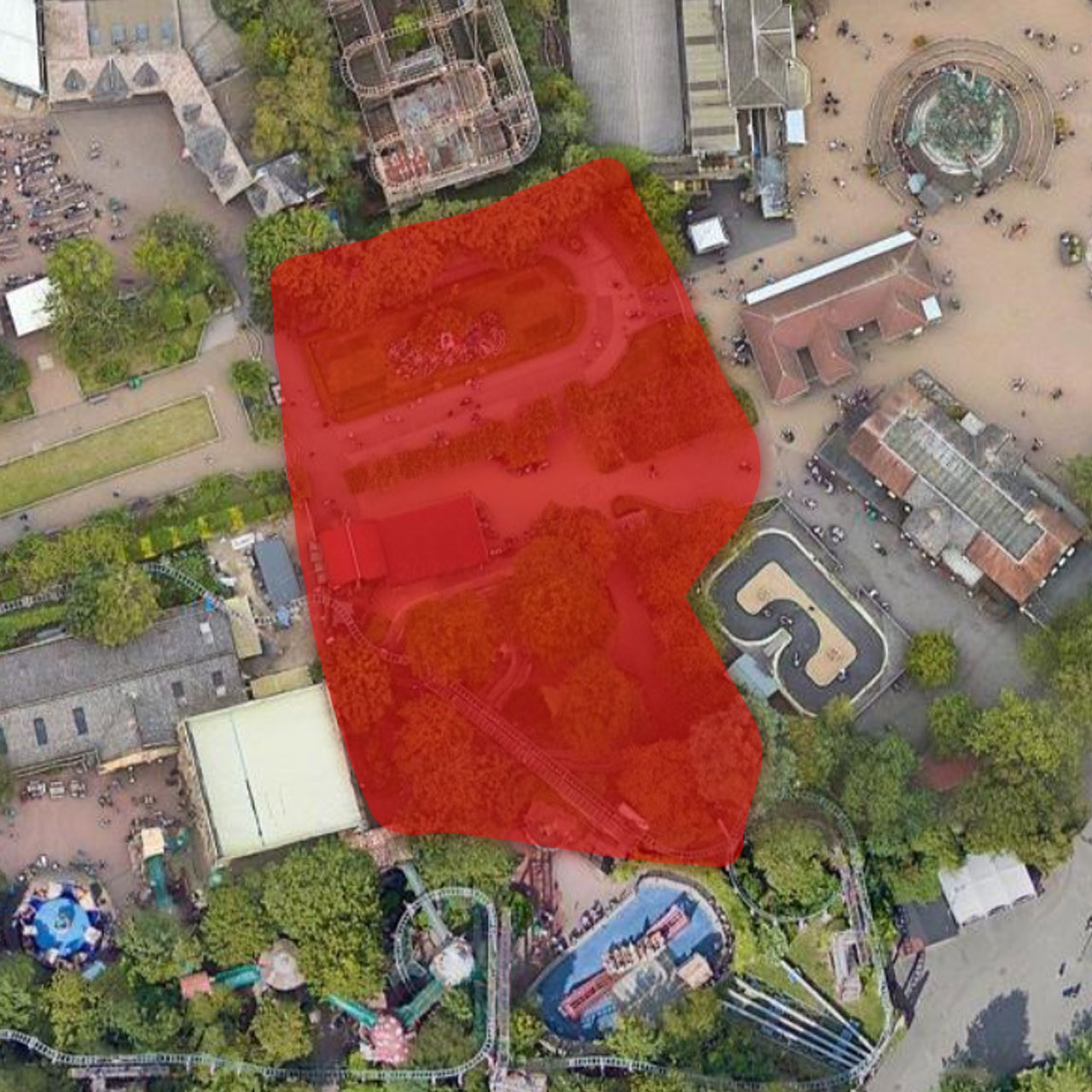 Tiny Truckers is somewhat of a thorn in Chessington’s side. Its popularity is great, but its throughput means it often gets long queues as a result, leading to complaints. Changes to the ride in the last few years have helped, but won’t fix the long-term issues of the ride aging. If we take in the space under utilised by the pay-to-play jeep attraction and the former Fastrack unit. A nice sized plot emerges. Prime for a new attraction, or even two!

Two possible plots sit in Wild Asia. Near to the platform of Kobra and the fountain which sits nearby is a wasted plot of land. Perfectly suited for a small flat ride or two! The other site sits behind the shop. Usually used for Glamping diner and an attraction for Howl’O’ween. The area could be used to install a new ride, a walk though attraction or perhaps a new animal encounter. Original plans for the area indicated a reptile house.

The plot currently occupied by Explorer Glamping is a big site prime for redevelopment. Recently however, planning permission for Glamping was extended by 5 years. Interestingly though, permanent permission wasn’t sought, only an extension. This could therefore mean further plans are in the works for this site at the back of Wild Asia. This could be a prime location for a new large development, such as a roller coaster or a land. 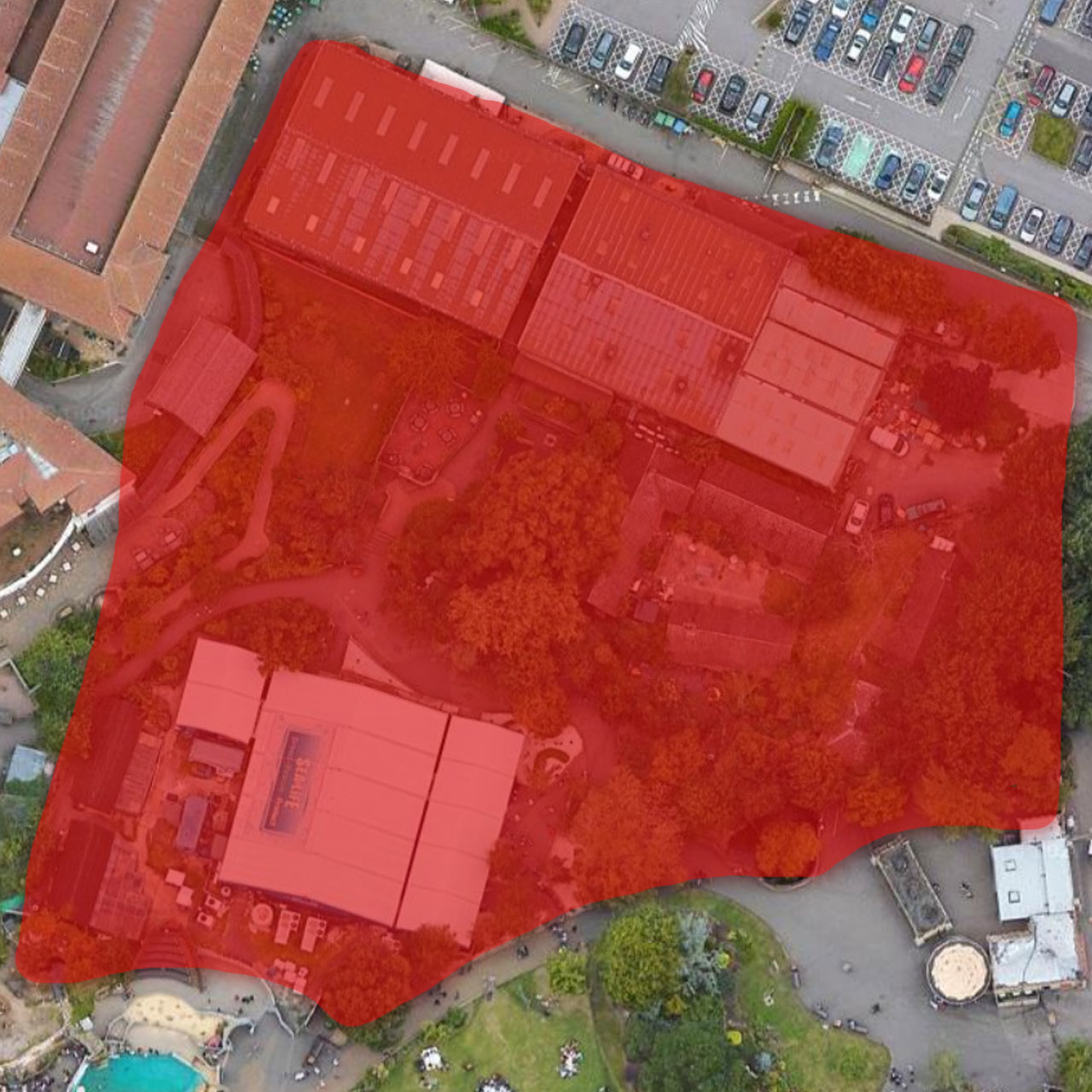 Perhaps the most exciting development site would be the current location of Base Camp. This plot, used for staff areas could be prime for a large resort development. It has long been thought a new permanent Sealife Centre could be installed within a new hotel wing, with something even larger on the back. We recently speculated a water park could come to Chessington and this would be the perfect location. Relocating Base Camp.

In September of 2016, Chessington World of Adventures Resort submitted its vision of the park’s future. The plan includes several visuals. Provides us with a rough outline of what we could expect to see over the next few years.

Below, we summarise what we could be seeing:

Whilst these plans are a rough guide, many of the plans look set to see the removal of older attractions. Marked for development are Peeking Heights, Toadie’s Crazy Cars and the Carousel. It is possible these could be up for removal. Or possibly rethemed as part of plans for new development.

Seen as one of the biggest parts of the development plan, Chessington is keen to install a new form of accommodation. The Safari Lodge project would see the installation of up to forty-five highly themed lodges. Made up of 11 ‘Premium Lodges’ and up to ’34 Standard Lodges’. Plans also show a large, themed restaurant and bar, known as the ‘Watering Hole’

The plans detail that a lot of heavy landscaping, thematic planting and animal interactions are seen as the key draw for guests. Offering up a unique form of accommodation at Chessington, with only Alton Towers offering a similar format with it’s Enchanted Village. The plans also outline the possibility of having a giraffe feeding platform for hotel guests.

Nestled in the backs of the Zufari landscape, the lodges would appear to have direct access to the Safari Hotel terrace, and their own reception down a small woodland path.

Two potential concepts for the rollercoasters are currently on display. The first is a straightforward jungle themed family launch coaster experience. Whilst the second shows a possible Sea Monster style theme, similar to that of ‘Krake!’ at Merlin owned Heide Park. This second roller coaster ride could potentially be a water coaster type attraction.

The picnic field is a key site for rollercoaster development. With plans also indicating that ‘Toadie’s Crazy Cars’ and other areas of Africa could host the second large attraction. However, at the time of publishing, this has changed, with The Rainforest development now taking up this area.

A large portion of the development plan centres on enhancements to the South Car Park. Despite the area being on strict green-belt land. The park is looking into maybe gravelling, or even installing a geogrid style system in the area. This would allow for safer driving and improve the operation of the car parks.

Secondly, in order to ease traffic leading up to the park on the A243 [Leatherhead Road], the plans consider repurposing the Explorer Car Park exit on Fairoak Lane into a second entrance. Diverting traffic from the A3 away from Leatherhead Road, easing congestion around the newly installed traffic light junction. The resort has conducted a full survey into the usage of its car parks as part of this plan.

Despite only recently remodelling the Trail of the Kings. The long-term development plan states the resort is looking to relocate this area of the Zoo. Moving it outside of the current park boundaries. This move would form part of a plan to revitalise the resort’s infrastructure by moving the Staff HQ [named ‘Base Camp’] to the former Trail of the Kings site, improving access around that area, and more importantly, freeing up room in the existing Base Camp.

Relocating the Zoo is also an option. With new enclosures part of the plans. Planned to take up a new plot of land behind Land of the Tiger. On some newly purchased land. This would also be adjacent to the possible overflow car park.

The resort has outlined several phases through which this plan will go through before ground is broken. Each phase taking place over the coming months. Currently, the resort is in a consultation phase, which will then provide feedback from local residents. This is used to make amendments to the plans. Final plans are expected to be submitted to the Royal Borough of Kingston upon Thames Council in late July. Individual applications for each attraction will begin submission from the start of November 2016. Therefore, none of these developments is expected to open until at least 2017.

The plan outlined here is currently only in its draft stages and is yet to be finalised. Do not take all that is written to be set in stone. 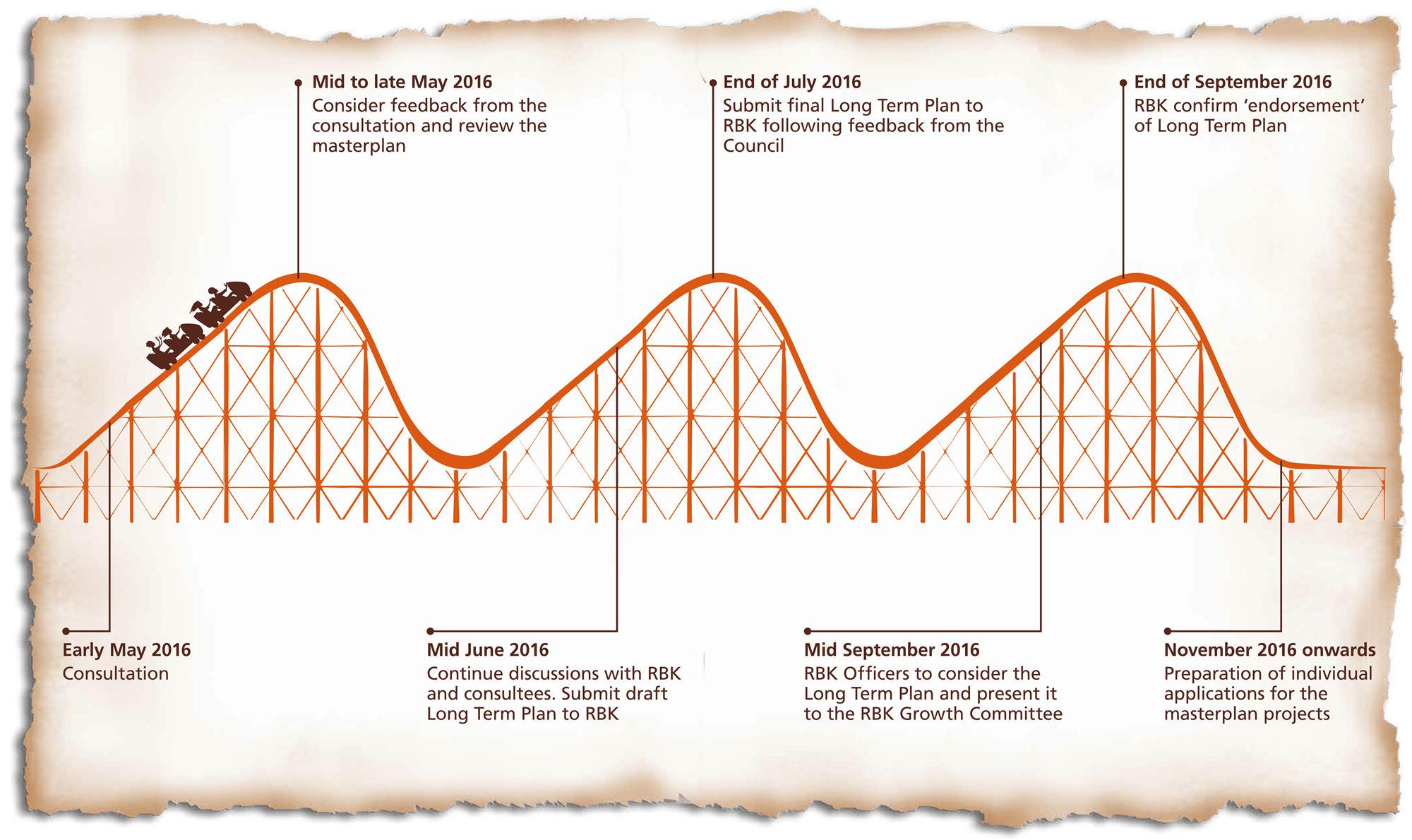